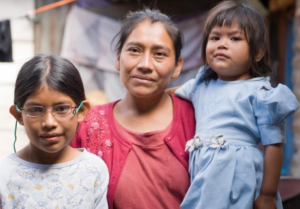 Age-related or congenital cataracts and untreated refractive errors aren’t the only causes of treatable blindness in Guatemala. They’re just the most common.

Here’s a quick run-down of some of the rest:

These ALSO steal sight from Guatemalans of all ages.

But there are no Vision Centers or Eye Care Hospitals in Guadalupe’s community. She lives with her mother and five siblings in a one-room, dirt floor house in one of Guatemala’s most dangerous neighborhoods.

That same year, the program evaluated 35,000 similarly impoverished children and ended up donating 1,140 pairs of eyeglasses and performing 110 no-cost surgeries.

Guadalupe and her peers are growing up fast and will need continued care. Locating a new Vision Center in her area will help meet that need.

The Real Scale of Need

Guatemala is the most populated country in Central America with 18 million people. The total number of Guatemalan men, women, and children suffering blindness or moderate-to-severe visual impairment compares poorly with that of the United States.

Visualiza’s work as the only private, self-funding, locally-controlled eye care network, combined with fee-based national hospitals and non-governmental missions, alleviates but a modest portion of this suffering. This is evident in nationwide eye care response statistics.

Our Guatemala National Eye Care Plan will make high-quality care available to every man, woman, and child in Guatemala – regardless of ability to pay – by 2032.

Give today to help us get closer to that reality!

Your Donation Will Restore Sight and Transform Lives